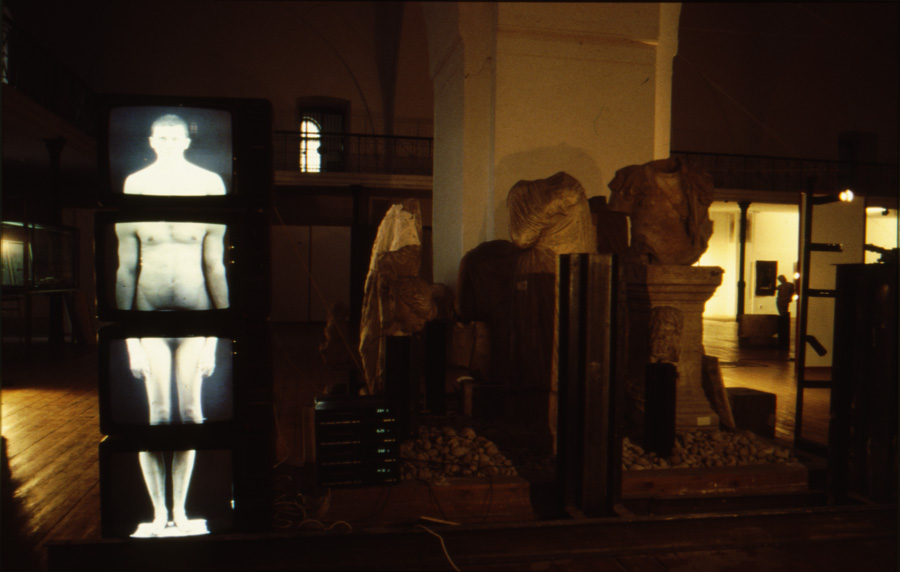 The Stte of Video Art in Bulgaria *abstract
2000

…In the early to mid 1990s, video equipment was used to document the numerous ritualistic performances that bombarded the art scene with excessive frequency in the late 1980s and early 1990s. That is to say, artists focused on video as a way to document artworks. Orlin Dvorianov, Daniela Nenova, and Ventzislav Zankov are the most significant examples of this trend. By 1994, artists began to include video in their installations, as well as a target material for computer manipulation of the “first degree.” Nedklo Solakov’s “Mr. Curator, please…” (1995) is illustrative of the possibilities for using video. Similarly, V. Zankov’s “Last Supper” (1995) made video central to the artwork…

…For instance, the decisive stimulus which grounded video art production within the contemporary art discourse in Bulgaria was the 2nd Annual Show of the Soros Center for the Arts-Sofia held at the end of 1995 under the title of “Video/Hart”. (“hart” stands here for the shortened version of the Bulgarian word “hartia” which means “paper”, and not at all for the much nicer possibility to say “video/heart” which would have been poetic, as well as radical…). Offering a “bridge” to the newer media by combining it arbitrarily with one of the oldest media in art, paper, the show presented the artists with the opportunity to experiment, as well as to use better equipment, and last but not least, to work within the parallel program in several educational workshops. The already mentioned works by V. Zankov and L. Boyadjiev premiered in this show….

…Not included in this selection but nonetheless significant for the trend are, among other works, Ventzislav Zankov’s “Escaping Identity”, 1997, where the passport photographs of the artist since age 14 until 1997 have been animated into a looped morph which ends in a ritualistic burning of the artist’s passport, the most official identity document…

This essay first appeared in the catalogue for the 46th International Short Film Festival in Oberhausen, Germany (2000).